Timo Kittilä’s work Odds and Ends (2017) is featured on the debut album Crossroads of the trio Ugly Pug. The work is a set of 13 miniatures with contrasting characters written for Paetzold subgreatbass recorder in C, 7-string bass viol and harpsichord premiered originally by Ugly Pug at the Tampering Festival of the year 2017.

Other composers featured on the album are Tero Lanu, Wilma Pistorius, Carlo Diaz, Eetu Lehtonen and Paweł Mykietyn. The release concert of the album will be held on the 7th of August 2021 in the concert series Ambigu at the Museum ‘t Kromhout, Amsterdam, Netherlands. The concert will also be streamed on Music Traveler TV on the 8th of August 2021.

More information on ordering the album and the release concert can be found from the following link:

The arrangements are written for piano and a small orchestra preserving the original composition as the piano part and adding material for the orchestra in the spirit of the original music. The project enables young piano students to experience playing with an orchestra early in their studies as there is not much elementary level orchestral literature for piano.

The concert will be streamed live on the YouTube channel of Tampere Conservatoire:

Timo Kittilä was interviewed (in Finnish) by Kulttuuritoimitus for their Composer of the Month interview series. You can find the interview from the following link:

Terrain, a work for clarinet ensemble by Timo Kittilä will receive its world premiere performance September 23rd, 2018, 15:00 at Tampere Conservatory, Finland. The work will be performed by the clarinetists of The Guards Band and Tampere Music Academy conducted by Tamas Paraczky.

In this work the composer has focused on visual associations evoked by musical texture and sound which is apparent from the names of its four movements: Mountains, Paths, Forms in the Mist and A Hurried Journey. 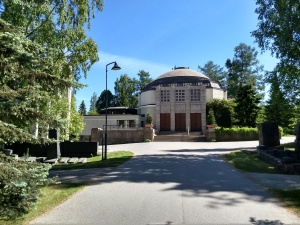 Timo Kittilä’s work Beside Still Waters will receive its world premiere performance August 16th, 2018, 17:30 in a concert titled Vihreille niityille (to green pastures) in the Small Chapel of Kalevankangas cemetery by Anni Härkönen (cello) and Anna Arola (organ). Both the composition and the concert are named after the words of the Psalm no. 23. After the concert there is a guided tour of the historic Kalevankangas cemetery.